The End is in Sight 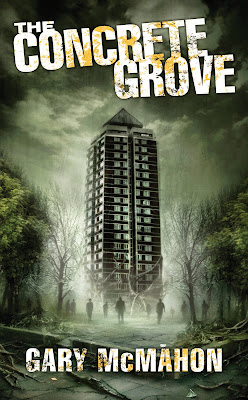 Just a short blog post today, I’m afraid, as I’ve not really had much time to think about anything other than the novel I’m working on. I have to deliver the manuscript of The Concrete Grove to my editor at Solaris in early March, and I still have between 10,000 and 15,000 words to write, plus the final-draft edits after a research trip to Northumberland in February… It’s all getting a bit hectic.

I’ve been writing this novel now for about 5 months, and only today did the ending decide to make itself clear. I even have a final line. This happens to me often – I have a rough idea of where a novel is going, but the finer details only ever sort themselves out during the writing process, and often it’s a long way down the line – too far along to quit if the ending reveals itself to be rubbish.
Thankfully I’m very happy with how this one’s going to end. It’s the first of a three-book cycle (not a trilogy, exactly, but three seperate stories linked by a location and certain events), so it needs to tie things up whilst leaving a few loose ends hanging for the second book to pick up. The finale will be downbeat, but I hope there’s also going to be a little bit of pathos. Bitter-sweet. A melancholy summation of the themes in the novel that might make a reader nod his or her head and think, “Ah, yes. So that’s what it was all about.”
Or maybe they’ll just throw the book across the room, screaming “What a load of shite!”
Who knows? For the proof is in the reading, my friends, and not the telling.

I "dabble" in writing myself (and am honoured to be sharing the pages of the Dark Minds Anthology with you). I'm also reassured that I'm not the only one who needs to start writing a story to find out what the ending will be.

Enjoy your trip to Northumberland - I'm sure you will, it's a beautiful and mysterious part of the country (as I'm sure you already know...)- I was born there and lived there for 29 years before making a very short move to County Durham where I now live. It's an environment I find extremely inspirational.

Good luck with your future projects.

Many thanks for your kind words - that's very good of you. I'm glad you're enjoying my work, and hope you continue to do so!

I'm originally from the northeast, too (Sunderland), so am always drawn to that general area. It's in my blood. There aren't enough horror stories set in Northumberland, if you ask me - it's a desolate and beautiful part of the country, rich in atmosphere.

All the best
Gary