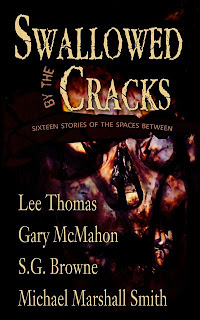 WHC2011 was a blast. The journey to Austin, Texas was long and tiring, but Jon Oliver - my editor at Solaris - made a great travelling companion. Free beer on the plane helped a lot. We didn't get to the hotel until after midning, just in time to catch last orders at the bar. Then Jon retired to bed while I made my way to a room party and stayed up until around 3AM.
The Friday was busy - I met a lot of great people and bought a few books (more than the one I'd intended). The launch for SWALLOWED BY THE CRACKS went very well (thanks to John and Martela for organising it!), and I think the audience enjoyed my reading. S.G. Browne, my fellow contributor did a hilarious turn and the short skit he did at the end was sick in all the right ways. I had a lot of compliments afterwards, which kind of made up for the nerves I experienced prior to the event.
Night-time: Mexican food, beer, and another room party.
Saturday was just as hectic, and I moderated a panel on "Commonwealth Horror". We were meant to discuss the differences, if any between UK, US and Canadian horror fiction but probably veered wildly off topic. My fellow panelists, Brett Alexander Savory, John Probert, Simon Clark and Simon Strantzas were superb. I probably alienated evryone with my dodgy northern accent. Then came the mass signing, where I actually got to sign some books. My God, they like me! Well, a handful did at any rate...
Night-time: the biggest BBQ meal ever - a vertitable meatapocalypse; fun and giggles in biker bars on 6th Street (a Black Sabbath tribute band in 'The Dirty Dog' being the highlight); more beers back at the hotel; yet another hot and sweaty room party.﻿
On Sunday morning we said a sad farewell to old friends and new, and began our long trek home. A 24-hour journey there, the same back. Next time I'm going for a week instead of a couple of days (who's crazy idea was that, then?)

Personal highlights of the Con: meeting Peter Straub (thanks to my mate Simon Strantzas), and having a pint and a chat with Jack Ketchum. Two of my literary heroes.