Creativity is a Dark Road 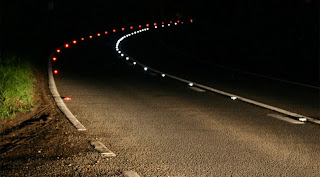 "They owned nothing: not the flat, the furniture, or even the pictures on the walls. Any records or information they needed was stored on an external hard drive, and the only physical things he required were his passport, a few clothes, his bag of twocking tools and the laptop in the spare bedroom. Everything else was losable, temporary, easily left behind."
- Driver C
"Reaping the Dark"

A lot of writers like to jump straight from one novel into the next. I'm not like that. I like to let the juices of one lengthy project run clear before embarking on another - so between novels I usually write a bunch of short stories and/or a novella.

This time, before I commence work on the third Concrete Grove novel, I'm writing a novella. The genesis of the idea came to me in the form of the following scribbled notes:

A botched drugs robbery. An opportunist getaway driver. An urban shaman using makeshift magic. A burnt-out travellers' site on the outskirts of a grim northern town. Kidnapping and torture. A supernatural creature called a Reaper

Last night I drafted a sketchy outline and wrote the prologue. I now have 2,000 words down and this one feels like a keeper. I hope so; I like my main character - Clark, the opportunist getaway driver - already. I'd miss him if this project died on me.

So, here I go again, writing my stuff, doing that strange thing I do. And I'm rather excited to see how this one turns out.

Been doing something similar meself, Gary. It's fun to do a project like this- it's not the mammoth undertaking of a novel, but it has more room than the average short story, enough for you to flex your muscles all you need. Sometimes I wish it was possible to earn a living as a writer just writing novellas...