This week I've been suffering from a chest infection and a sinus infection, so I've been stuck at home trying to recouperate. I've watched a lot of DVDs, read some books, and spent way too much time on Facebook. It was during a spell on the latter that a US writer friend - Nickolas Cook - put me onto something called creepypasta.

Creepypasta is kind of a gerneric web term for short horror stories purporting to be urban legends, usually posted anonymously. It's all very knowing and self-referential - a kind of unofficial internet metafictional project - and it's fascinating. This, in turn, led me to check out things like smiledog.jpg, the Slender Man and The Marble Hornets Project.

This last one - Marble Hornets - is the thing I want to talk about here.

The series consists of 57 (to date) individual Youtube uploads which are meant to be footage shot by a small group of people who were making a film school project called "Marble Hornets". The footage documents the director's descent into apparent paranoia and his eventual disappearance, the clips spliced together by a friend of his who begins to discover events on film that he has no recollection of happening.

Before long, we begin to get glimpses of a tall, thin suited figure known elsewhere on the internet as the Slender Man, and the protagonist is watched, stalked, and finally attacked, by white-masked figures.

The whole thing is both epic and intimate, absurd and insightful, messy and often completeley fucking terrifying. I think it's the first masterpiece of internet-based meme fiction. The project seems to represent a new wave of horror storytelling; something I'm calling Meme Horror. These films take their inherent flaws - lack of budget, amatuerish production values, non-actors, guerilla filmmaking - and turn them into strenghts. Equally inspired by the Mumblecore movement and The Blair Witch Project, it's like we're seeing a backlash against CGI-driven, gore-filled Hollywood horror, and these weird little films manage to generate a palpable sense of dread.

Yes, after around the "Entry 30" mark things start to get repetitive and some of the initial unpredictability is lost, but there's still something fundamentally chilling and utterly compelling about the shaky little hand-held film clips. Even a brief clip of a children's party takes on an ominous note of dread in the context of the whole gestalt.

This is good stuff; it's elemental terror, hitting deep nerves in our modern psyche: white middle-class ennui represented in the form of horror Cinéma vérité .

I have seen the future of horror, and it's a meme...

Check out Marble Hornets for yourself: 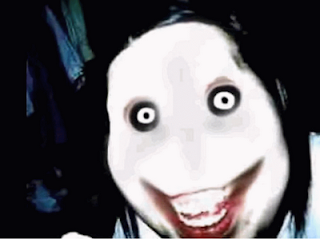 Been watching these all afternoon. Good stuff; great recommendation.

Thanks for this link, Gary. Heard of the Slender Man myth before. I find it all more imaginative than anything recent horror films have regurgitated for us.

I hope you don't mind, but I've referred to this on the BFS site reagrding 'found footage' films.

Whats the name of the picture at the end of the post called?

I have no idea...but it's terrifying.