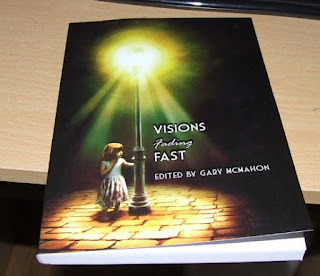 My second project as editor for Pendragon Press is finally upon us - Visions Fading Fast is available now in paperback and the hardback edition is imminent.

I'm extremely proud of this book. It took a while to get here, facing many obstacles along the way, but contains some breathtaking stories by some brilliant authors.

Just to give you a taste of what to expect, here's an excerpt from my Introduction to the volume:

"Blues Before Sunrise is linked to ’s excellent novel From Blue to Black (Serpent’s Tail, 2000), but you don’t need to have read the novel to enjoy the story. It’s a dense, layered, ambitious piece of fiction about a faded low-rent pop star at odds with his past and with his self. The prose – as you might expect from this author – is exquisite, and not a word is wasted. This is a prose piece viewed through the eyes of a poet.
This story moved me in all kinds of ways, and the heartbreaking final passages gave me bad dreams for at least a couple of nights. I think it’s one of the best things he’s ever written, and it cements in my mind the opinion that the man was born to write about music, and about fear. This, my friends, is ’s version of the Blues.

Nathan Ballingrud’s Wild Acre is, at heart, a story about male emotions. Ballingrud writes this kind of thing extremely well – probably better than anyone I can think of. His protagonist here is struggling both with his own identity as a man, and with the very notion of manhood in a world that has tipped askew during a violent event which has left him in the midst of some kind of change or transformation.

But there’s no tough-guy posturing here, just an insightful and honest examination of the male psyche under pressure. It’s also creepy as hell.

I love this story; I covet the way the author completely nails the theme, the narrative voice, and that elusive quality which makes a story great.

Dancer in the Dark is one of Reggie Oliver’s theatrical ghost stories. The theatre setting is one with which he is intimate, and he never fails to bring a sense of realism and a welcome dose of humour to the politics and personality clashes involved in putting on a play. Here we have a claustrophobic set-up, some hideous characters, and an unforgettable spectre that still haunts the stage of my mind.
For me, this is yet another example of why Oliver is one of the best writers of the supernatural ghost story at work today, and the quirky atmosphere he always manages to generate is memorable for all kinds of reasons. Alongside the actual spectre, this story is haunted by the phantoms of nostalgia, of lost chances and missed opportunities. Like those in all the best supernatural fiction, the ghosts here and metaphorical as well as literal.


The History Thief is a curious, and remarkable, piece of work and Kaaron Warren is an extraordinary writer. This is either the story of a man with a peculiar talent or the story of a man whose world is disintegrating around him. Possibly, it’s both. Or neither.
’s debut novel, Slights, was one of the best things I read the year it came out – and this story exists in the same universe, with an unreliable protagonist, an edgy viewpoint, and the unmistakable sense of an ordinary kind of madness.

Like most of the stories in this volume, The History Thief is character-driven: there are no easy answers, and even the questions it asks are difficult. Each reader will take something different from the story, and at the very least it should leave you moved, shaken, and perhaps even doubting your sense of self.

Paul Meloy is perhaps the most gifted writer I know. His prose is dark and enchanting; an oil-slick rainbow. His stories are bleak, yet they possess an intricate and fragile beauty.

Night Closures is set in a mythical 1970s , a place of Chopper bikes, neglected council houses and Texan bars, of streets and alleyways that are really just playgrounds for a blasted childhood, and old refrigerators dumped casually on waste ground... At certain points in the story, I felt that the author was channelling specific moments from my own childhood (“…the purple ones were his favourite – he liked the raisins…”)

The monsters here are subtle and complex. Nobody is safe. Nothing is sacred. You only realise what kind of story this is right at the end, and by then it’s too late, your heart is already broken. I cried the first time I read this story; they were tears of loss and nostalgia and perhaps even of envy. It’s the perfect way to end this book." 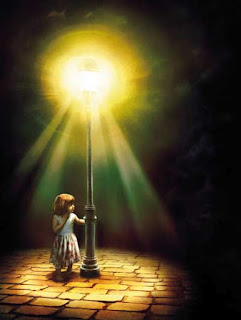