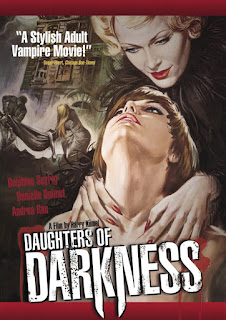 The other night I watched on DVD Harry Kümel's Daughters of Darkness. It's been a long time since I first saw the film - on Alex Cox's much missed Videodrome series, if memory serves - and it was everything I remembered it being.

Based loosely on Sheridan Le Fanu's Carmilla, and casting Delphine Seyrig as a sexually charged Countess Bathory, the film has a young honeymooning couple stranded in an off-season Ostend hotel. Bathory and her equally sensual consort arrive, and the couple is subjected to a seductive onslaught that leads, inevitably, to crimson-washed mayhem.

The pace of the film is wonderfully ponderous, it's incredibly pretentious, and when the violence comes it's all a bit contrived and comical. But I loved it. Everything I enjoy about European horror films is there: pretension, perversion, gleeful sadism, gratuitious bloodshed, and an utter disregard for the logic of real life situations and characters.

The location of a somewhat blustery Ostend is used wonderfully, and could almost be seen as a visual metaphor for the ennui of the characters. The hotel is a treasure of faded grandeur. The actor who plays the hotel manager is deliciously dour, Seyrig is sex in high heels and gold lame, and the girl who plays the young wife has the sexiest nose I've ever seen in a film.

Just look at the picture above and tell me you don't want to see that...now go and order the DVD.