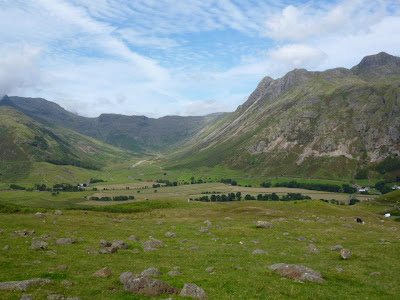 I've just returned from a week's camping with my family in the Lake District - Great Langdale, a truly beautiful part of the world. While I was there I didn't do any writing, and the only reading I did was a couple of copies of Runner's World magazine I'd stashed in my rucksack.

We went for long walks in the glorious landscape, I went for some runs in the hills, and we drank local ales and ate some fine local produce.

Since coming back, a lot of things I'd been feeling for quite some time have crystalised. In short, I'm taking a step back from social networking - the mindless Sturm und Drang of Twitter and Facebook has started to bore me. I'm sick of seeing people with limited talent networking their arses off and squabbling like vermin in their efforts to be noticed. The absurd sense of entitlement and self-unawareness I see online is breathtaking at times. It saddens me.

So I've decided to refocus my energies on the things that matter to me: the real things, like the craft of writing, my family and friends, reading, running, and real-life relationships. I'll still be around on Facebook, just nowhere near as much, and of course I'll maintain this blog.

Meanwhile, work progresses steadily on the new novel, I've sold a few new stories, and I'm excited about the forthcoming release of To Usher, the Dead.

Just a quick mention about the Olympics. Despite a lot of political and organisational shit during the build-up, the event itself has been glorious. It's inspirational to see so many athletes who've sacrificed so much performing on such an important stage. Team GB has done brilliantly. I've been watching as much of the televisied events as I can, and personally found the gold medal wins of Mo Farah and Jessica Ennis particularly inspiring. Today I ran a PB - my best time over 3 miles since returning from calf and knee injuries. It isn't much; just a trifle, really. But it meant something to me. It meant a lot, actually...

Positive wishes from me to you, Gary. For reasons similar to your own, in 2011 I abandoned social media entirely from January to May, and then, after resuming them again for a few months, bailed on Facebook again this past March while remaining with Twitter in a more focused and deliberate fashion than before. The social media universe, while it certainly has its uses, is increasingly assuming the form of a creative and spiritual black hole from which nothing, not even the human soul, can escape. All of its manifestations should come with a warning label along the lines of "CAUTION: Use with care. May be addictive, draining, alienating, and hazardous to your health, privacy, and creativity."

If you haven't seen it, check out "Refugee from Facebook questions the social media life" (Washington Post, August 3, 2012, http://tinyurl.com/9ghutjp). It's a profile of Katherine Losse, who was Facebook's 51st employee and the personal ghostwriter for Mark Zuckerburg, and who in 2010 quit her job at FB, cashed in some of her stock options, and moved to remote Marfa, Texas because she had "soured on the revolution in human relations she witnessed from within. The explosion of social media, she believed, left hundreds of millions of users with connections that were more plentiful but also narrower and less satisfying, with intimacy losing out to efficiency. It was time, Losse thought, for people to renegotiate their relationships with technology." The piece describes some of the disturbing things she witnessed from inside Facebook's empire related to user privacy and the birth of a kind of ad hoc, grassroots Orwellian culture of surveillance based on the idea that absolutely everything is fair game to post to FB, regardless of how individuals might feel when an update involves their own information or images.

Perhaps most tellingly, Losse says she originally deactivated her own Facebook account when she left but then reactivated it (with a new determination to maintain strict control over her privacy) after realizing during the course of writing a book (the just-published "The Boy Kings: A Journey into the Heart of the Social Network") that a total rejection was too extreme. Her stated reasons sound like something out of a future nightmare novel -- a valid chain of reasons that nonetheless reflect a quasi-dystopian circumstance:

"You can’t get away from it. It’s everything. It’s everywhere. The moment we’re in now is about trying to deal with all this technology rather than rejecting it, because obviously we can’t reject it entirely. We can avoid one site or another, but we can’t leave our phones at home anymore."

I blogged about some of these things just a couple of days ago: "Facebook, Fahrenheit 451, and the crossing of a cultural threshold" (http://tinyurl.com/9c877yt).

In any event, I wish you the very best as you pull back from the social network. It'll be interesting to hear any updates from your experiences.

Christ, that does sound like something out of Orwell...and yet, it sounds completely relevent, too. Social media is destroying human interaction in ways we don't yet realise - I'm convinced of this. It's also creating new hybrid emotions and strange modes of social intercourse that might be even more damaging.

This is a grave new world in which we find ourselves.

I understand your position, Gary and it's items you've been talking about for a while and if it's the best for you, Emily & Charlie and your writing and sanity, it's the way to go!

I'll miss you around here, but we'll always have FCon!

Glad you had a great holiday, speak to you soon (and looking forward to "The Quiet Room" - need a critique?)

Don't blame you, Gary. There's something about Facebook that occasionally gets up my nose but I've struggled to pin down exactly what it is. I think the comment about everything being fair game to post on Facebook is probably the issue.

In any case, all the best. As long as you're continuing to write, that's what matters.