When I first started taking my writing seriously and getting some publishing credits to my name, I found it easy to identify in terms of genre where I stood as a writer. I wrote ghost stories and horror stories.

Life was much simpler back then: I didn't have a wife or a child, I didn't own my own home, I earned lots of money working freelance, and I wrote horror.

These days things are much more difficult to pin down. I have a wife and a kid and a mortgage. My emotions swing between poles on an hourly basis...and I'm no longer quite sure what to call the stuff I write.

I still write horror - at least that's what I call it, but to me it doesn't feel like a lot of the other genre stuff I see out there, or the stuff I grew up reading. I'm not a good enough a prose stylist to call what I write literary, yet there's a lot more to it than ghosts and monsters. Indeed, the horrors are usually allegorical, and usually spring from the emotional trauma of my characters rather than some external supernatural force.

Then again, I'm a huge fan of writers like Ramsey Campbell, Steve Rasnic Tem, T.M. Wright, Brian Hodge and Nathan Ballingrud, and I think my work sits more comfortbaly alongside theirs than it does anywhere else in the embittered, battle-scarred landscape we call genre fiction.

Today I wrote a new story. It's called I Live in the Gut, which I think is a quintessential McMahon title. The story is also representative of what I write. It's about a man - a fighter, who doesn't think he lives in the realm of the intellect. This man finds a strange humanoid sea creature on the beach one night and takes it back to the caravan where he lives (or, more specifically, hides away from the world). There follows a lot of emotional wrestling, some sub-aquatic sexual abuse, and the appearance of what I can only call a sea monster. But it isn't a monster; not really. It's an allegory.

I finished the first draft of this story a few hours ago, and I have no fucking idea what it's about.

It's horror, but it doesn't exist to scare. I hope it'll disturb people, and perhaps even make them think. But it's purpose isn't to jump out of the shadows and say Boo!

The writer and editor Jeff Vandemeer likes to call the kind of stories I like (and think I probably write) The Weird. Maybe that's a better genre label than Horror. I'm not sure. In truth, labels have never meant that much to me (despite my often thinking about them and what they might indicate to prospective readers), and these days they mean even less. I write what I write what I write...and that's all.

Or maybe I just spend too much time navel-gazing and thinking about this shit? 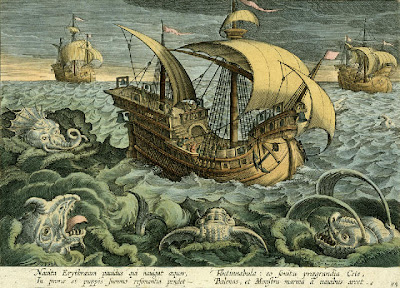 On Genre! On Donner! On Blitzen!

And you can steal this from me. Someone asks, "You a ... horror writer?"

You ask, "Do you buy horror stories?"

Or fill in appropriate blanks.

Well, all I've got to say is keep thinking, keep writing.