This afternoon I went for a 5-mile run. This isn't unusual for me on a Saturday, as I tend to save a longer run for the weekend and do two or three 4-milers during the week.

About three miles in, I had something of an insight.

Several writers whose work I admire (people like Tim Lebbon, Joyce Carol Oates and Haruki Murakami) enjoy running and claim to see a correlation between the two pursuits. I've felt this, too, but I often found it difficult to actually describe the similarities between running and writing. But now I know what it is that makes them so alike.

In running as in writing, you are not concerned with the past or the future. When you run, you focus not on the miles behind you or those which lie ahead of you, and not even on the mile you are currently running. You focus only on the footfall you are experiencing in the here and now. It's the only way to run, especially if you're going a long distance. What's behind you is already gone; what's up ahead of you is another challenge to worry about when you get there.

Writing's like that for me, too, especially when I'm writing a novel. I don't consciously think about what I've already written or what I need to write in the future to finish the book. I think only of the sentence I'm working on at the time. Sure, all that stuff's still in my head - because I know exactly where I am in the novel - but it isn't important to me at the time. I focus only on the words I'm writing when I'm writing them, on the sentence I'm trying to build. Then I move onto the next one. When I run, I focus on the movement of my body as I take a single step. Then I move onto the next one.

Running and writing. Mutually compatible pursuits. Both keep you right in the moment, not allowing you to budge from that vantage point. I think that's why I enjoy both of them so much. I'm not the kind of person who likes to dwell much in the past (because quite frankly a lot of my past was shit), and the future is too far ahead of me to think about too deeply. I am a moment-dweller - I obsess about the things that are happening right now. Running's like that. Writing's like that. Both of them are important to me; they enhance my life. 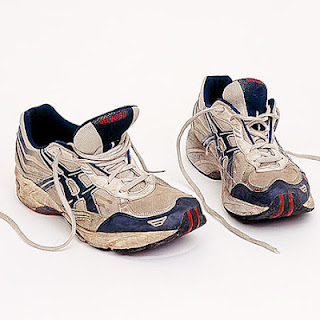 Can only agree with this. They increasingly feel like opposites of the same coin for me - one physical, the other mental, but completely harmonious.