“Get out!” she said again, screaming it this time. Meaning every word.

Higgins gazed at the floor, feeling lost and alone and just a little bit put out. Wherever he went in the world, his stay was always temporary. Each city eventually rebuked him, every house became an unwelcome retreat, and women always saw through him in the end.

He took a step forward and revealed the knife he’d been hiding behind his back. It had a long blade and was usually used for boning fish.

Higgins nodded his head and took another step.

It took a lot of hard work to gain access, but eventually he opened the door. Lowering himself down into the wet and steaming cavity of her stomach and pulling the rubbery wings of peeled flesh tight about his thin frame like bed sheets, Higgins felt something yield softly beneath his weight. Wet bones lay scattered like toys on the floor; he’d dispose of them properly later, once he’d settled in.

This one felt comfortable; perhaps he could even stay for a while, long enough at least to call it home.

It was really all he ever wanted: somewhere to stay. 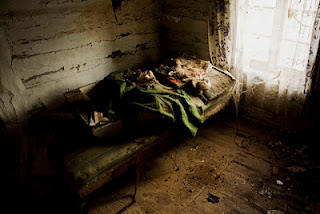