Reading, Writing and Not Running

I haven't updated this blog for a little while. Sorry, I've been busy. Real life got in the way, as it often does.

Beyond Here Lies Nothing is officially released, and I hope it's doing well. I've seen a handful of reviews, and they've all been stellar so far.

A couple of weeks ago I was down in Brighton for FantasyCon, the annual convention held by the British Fantasy Society. It was a brilliant weekend - as usual - and I spent more than I'd budgeted for on books. My panel went well, my readng went very well, and I got to catch up with some people I don't see anywhere near enough of during the year. Usually when I come away from FantasyCon, I feel inspired to write more, but for some reason this year I felt creatively drained.

But I'm pushing on with work on The Quiet Room, and the novel is slowly starting to find its voice and take shape. This is a much slower paced novel than any of my others, which makes it more difficult to write. I'm really happy with the words so far, though. I think it contains some of the best writing I've ever produced.

I've torn a calf muscle so am unable to run at the minute. This is affecting my mood; I often feel anxious and a little depressed. I'm doing other things, though, to take up the slack: karate drills, core work, and sessions on the exercise bike in our cellar. I get to read while I'm on the bike, so that's good.

The season is turning. It's definitely autumn now. The leaves on the trees are all going brown and gold; there's a chill in the air; the days are a lot shorter and darker than they were a few weeks ago. It's a  melancholy time, a season of reflection. This year I haven't achieved nearly as much as I would have liked in terms of writing, but I feel that I'm still moving forward. So far I've submitted thirteen short stories in 2012 and they've all found a home. That's pleasing, but it doesn't take away from the fact that I haven't written enough of the novel, or even started the next one (which is commissioned, so I need to get a move on).

On the plus side, I seem to be making more time to read. I've read a lot of good stuff lately - some strong short stories by writers like Ray Cluley and Stephen Bacon, and a few novels from the ever-increasing book pile. 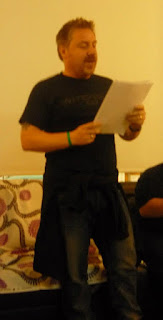 I think every writer always feels like they haven't written enough - it's a tough and gnarly stick to beat yourself with. Considering the amount of times I've read a review of your work that begins with something like 'The prolific Gary McMahon has produced another brilliant piece with [insert title]' or words to that effect, I find the amount your produce is both inspiring and motivational.

Oh, and thanks for the kind words! I'm glad you've liked the stories.

Thanks, Ray. I appreciate you commenting on here.

Sometimes, when I'm not writing enough, I feel the fire burning me up inside. I don't see myself as prolific at all. I'm just trying to control the flames.