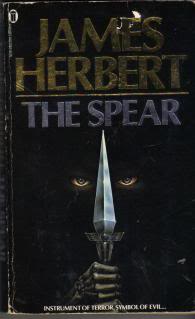 So James Herbert is dead. I heard the news last night, as I was listening to my son read before bed. My wife came up and told me she'd seen it on Facebook. He was only 69. That's young, these days. Far too young to die, anyway.

Herbert meant a lot to me when I was in my early teens - I read his stuff obsessively back then. He was out very own UK version of Stephen King, only ruder, cruder, and funnier. I loved - and still love - those early novels: Rats, Lair, Domain, Survivor, The Spear, Fluke, Shrine, The Fog, The Dark, Moon. They were bloody and they were brilliant.

I lost touch with his work when I was older; those later novels somehow didn't have the same kind of magic. But I always had a soft spot for Herbert. His stuff had a massive impact on me when I was young, and probably led to me trying to write my own horror.

I wish I'd taken a few minutes to speak to the man at World Horror a few years ago, or at FantasyCon last year. I wish I'd shaken him by the hand and thanked him for the entertainment his books gave me. But I didn't. I'm not one for approaching the big guns.

Rest in peace, James Herbert. You inspired a generation of horror writers to give it a go, and for that we salute you.

Now I'm off to choose which of his novels I'll re-read in his honour.