So on Sunday I ran in the Leeds half Marathon. My time was a respectable 02:04:58. I could have broken the two hour barrier, but I was running with a severe head cold. Initially I was disappointed, but now I'm just glad I took part despite feeling ill. My boy was proud of me anyway... 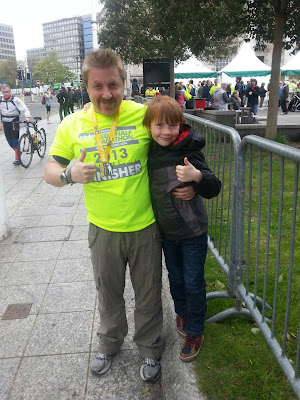 It feels strange to have got the race over and done with after training so hard for four-and-a half-months. There's this weird conceptual gap in my life. Once this cold is out of my system, I'll get back to the running and decide which race to do next.

Meanwhile, I need to finish The Quiet Room. This novel seems to have been hanging round for an eternity. I started work on the project at least three years ago. It should be finished by now, but it isn't. As usual, I'm finding it fifficult to write. Real life problems keep getting in the way, and believe me this year there seem to be a lot of them to get in the way. But I'll get there in the end. I always do. I endure. And hopefully it'll be my best novel to date.

This year will see the release of two short novels, The Bones of You and The End. The former is a modern ghost story and an exploration of love, guilt and duty; the latter is a London-set apocalyptic story about a "suicide epidemic". I'll have more news on both of these titles soon.

There isn't much else to report on the writing front. I've been keeping my head down, keeping out of trouble, and trying to maintain some kind of focus.

Congratulations on completing your run! Well done. Are you going to keep it up and target another race? I have one coming up in August, the City to Surf here in Sydney. Good luck with your writing too, I know what it's like when other things get in the way. I'm still trying to finish my first short story collection, it's hard to find the time.