So I'm back home after six days in New York City, where I got to wander around all the sites of my favourite 1970s films in a place that no longer resembles the city from those films in any way whatsoever. My wife and I did the usual touristy things, but we also did a lot of walking around, just taking in the place. We rode on the Wonder Wheel at Coney Island, saw the Edward Hopper paintings at the marvellous Whitney Gallery, took a boat trip along the Hudson, walked over the beautiful Brooklyn Bridge, and ate and drank too much; I ran (and got lost) in Central Park, bought a lot of hoodies and T shirts, and put on several pounds from the massive portions of food.

I also got to spend time with my mate John Roome, an incredibly talented and creative musician and composer who works in movies and TV. I came away from our brief time together feeling inspired, as I always am when I get the chance to hang out with fellow creatives. John's a great guy with big plans, and we have a similar perspective on what horror should be about.

So now it's back to reality. For the rest of the year I plan to hit the running and karate training as hard as I can. I have a novel pitch to prepare and at least one novel to finish. I've been invited to submit stories to a couple of exciting anthologies. I'm going to adapt my short novel The Bones of You into a screenplay. 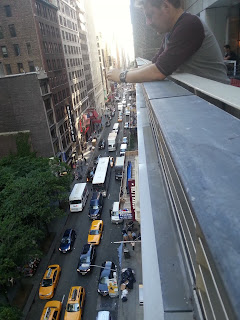 Brilliant - just reading those names sparks nostalgic pangs for a city I've never visited, but only watched or read about.

Great news on the screenplay too!

A place I'm waiting to visit one day myself...