I don't usually blog about television shows, but I've been a huge fan of Dexter right from the start, and now it's all over I feel compelled to say something about that controversial finale. 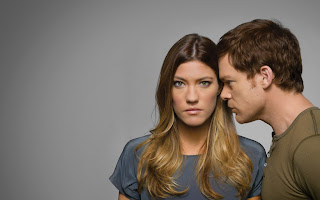 This might be the only place you read a positive response to the final episode of Dexter. Most people I know seemed to hate it. I thought it was the show's finest hour.

The episode was not only a fitting ending to what has been a brilliant, subversive piece of television, but it was also a sad one. Strange, beautiful, melancholy, and ulimately moving in all kinds of ways, the episode capped off one of the greatest TV shows I've ever seen.

Getting straight to the point, a lot of people seem to have wanted one of two things to happen: Dexter escaping to get his Happy Ending, or Dexter being caught or killed. I think either of those would have been a big mistake. They would have been crowd-pleasing and empty, and out of character with the entire show, betraying its subversive ethos. A lot viewers wanted resolution, a clear-cut ending. What they got instead was anticlimax and ambiguity.

Deb's death also seems to have caused some consternation. But it's been coming for a while. I actually thought the writers were going to kill her off a couple of seasons ago, but instead they made her the focus of the show (she'd always been it's heartbeat). It was another brave move from a show that never did quite what the viewers expected, or wanted.

Those final bedside moments between Dexter and Deb were profoundly sad, almost unbearable to watch. That sadness permeates the entire episode. What Dexter did made perfect sense in terms of the show's internal logic. It might not have been nice or palatable, but it was true. Deb was a free spirt, a  force of nature. She could not be allowed to exist as a vegetable. She'd done too much, seen too much to live with it all. Dexter himself was in the process of changing again, reverting back to, even becoming, what he had always been: a monster. The episode title is no accident: remember, no matter how much we empathised or sympathised with him over the years, Dexter was always a monster, but a monster pretending to be a man.

Dexter spent eight seasons trying to convince himself that he was human, and ultimately he was forced to accept that he wasn't. So he erased all evidence of that former struggle: he deleted his sister, the only thing that had made him even approach the illusion of humanity, and he let his son go (off with another seial killer, one possibly even more monstrous than himself). When he sailed off into that storm, the Dexter who had struggled with his identity was killed. The thing that emerged - shambling, bearded, shark-eyed - was the Dark Passenger. It is said that serial killers spend a long time trying to become. Dexter became one last time; he was willingly absorbed by the thing he'd always carried inside him.

That final shot is incredible. The thing that had once been Dexter, sitting at a small table in an isolated shack, staring dead-eyed into the camera. I have never been so haunted by a scene in a television show. That image will stay with me, open to interpretation, for a very long time.

I'll miss that monster. I'll miss Dexter so very much.