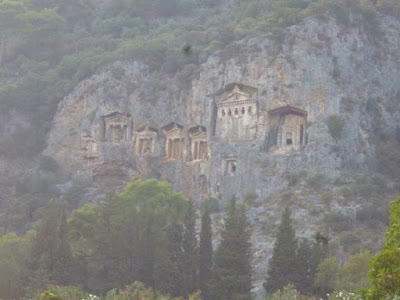 Three days ago I returned from a family holiday. We spent two weeks in a huge villa in Dalyan, Turkey - a small, laidback place at the edge of a beautiful river close to where it meets the sea. We swam, ate wonderful food, spent a glorious day on a boat touring the coastline, experienced a restorative mud-bath and bathed in the thermal, enjoyed a Turkish Bath and full body massage...in short, we had an amazing, relaxing time. I read 8 books while we were there. That's almost the same number as I read it total all of last year. And something curious - something good - happened.

I regained my creativity.

I wrote most of the first draft of a story in a notebook, and all that reading fired up my creative furnace. Most of all, I started to once again believe in what I was doing. I've realised that was the problem, the reason why I was suffering from such a horrendous case of writer's block: I'd stopped believing in writing, ceased to have faith that it meant anything more than just another deluded arsehole writing yet another genre book that would vanish from the shelves a few months after it was published (if it was even published at all).

All that is still probably true, but the crucial difference now is that I don't care. I believe in my writing again, and that, my friends, is priceless. It's the one thing that keeps any creator going.

Good to hear, Gary. I think writing for yourself is the most important thing a writer can do, and the hardest. Good luck with the second draft.

Good to hear the fire is back! Keep feeding it, sir :)

Glad to hear you're all fired up again! Audrey and I won't be at Fantasycon this year - but depending on where it is the following year, hopefully catch you then!