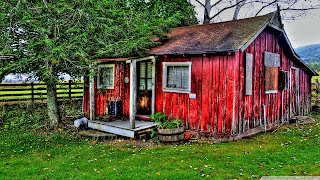 It's something that crept up on me when I realised that the last two short stories I wrote were actually part of a novel I didn't know I was going to write. I'm quite excited about this project. It's forced its way in and demanded to be written. I've even started a new notebook, which is something I haven't done in years. I'm hoping it's a project I might actually finish.

I've gone back to my roots with this one (as I did, in some small way, with THE BONES OF YOU). No possessed housing estates. No psychic detectives. No end-of-the-world scenarios. It's just a grim little drama about absent fathers, toxic relationships, and a little red house that appears during times of emotional turbulence.


A momentary silence falls between the two men. Empty. Yawning. A void opening in the gap between their minds, their bodies, into which either one of them might fall.
Marc gets to his feet and pours another drink. He doesn’t turn to face the room when he swallows it; he just necks it and pours another before turning around, smiling. “Yeah. I hear you. I know what you mean.”
But that smile, to Kurt, says otherwise. The smile says, your problems are nowhere near as important as mine; they are small-fry; they barely even register on the great, grand show that is my life.