A long time ago, a ship went down in the middle of a vast ocean. The lone survivor of this wreck was washed up on the shore of an uninhabited island. He walked into the forest and, knowing a little about survival, he built a shelter among the trees. It took him several days to construct, and during that time he ate fish that he caught from the sea and fruit from the nearby trees.

One night a storm came and destroyed his shelter. So he started again. He rebuilt what had been torn down, taking his time, trying to make it even stronger this time. He continued to take the fish from the sea and gather the fruit from the trees, and even set traps for small animals in the forest.

Weeks later, another storm came and his new shelter was destroyed. So he built a new one, even stronger this time - spending weeks rather than days to make sure it would withstand the storms.

Years passed. He ate. he slept. He walked the beach, looking for ships that never came. A great storm arrived, lashing the island with rain and hail and vicious waves from the sea. This third shelter took a lot of damage. Once the storm had passed, not much of it remained. But the man survived. So he started again.

More years passed, and the man was dying of a fever. He lay on his bed in this final shelter - one that had lasted all this time - and he thought about his life, what it had become; he looked back on his time here, on this island. He had never married. Nor had he fathered children. He had been in the prime of his life when he came ashore here, and now that life was almost over.

The man decided that he did not have any regrets. He had worked hard for what little he had, and once he was gone the island would once again be uninhabited. He would become part of the island, absorbed by it. His flesh and bones would feed the island. His ghost would walk the beach and look out to sea, watching the distant horizon. No ships would come. They never did. But it was enough that he had existed here, upon this small patch of land, and that his life had made but a small dent in the fabric of things before fading away.

He died. He rotted. The shelter stood for two decades more, and then was torn down in yet another huge storm. The wood was washed away. The man's ghost eventually faded.

Then one day, a ship came. Men came ashore and walked the beach, entered the forest. they kicked through the scant remains of the man's shelter and wondered who had lived here, making their home in such a desolate place. When they left, their footprints faded into the wet sand.

The island continued to exist, until one day it awoke from its slumber, rolled, and dived beneath the surface like a great whale, going deep, returning to a cool, dark place it could barely even remember, even during the long dream from which it had emerged. 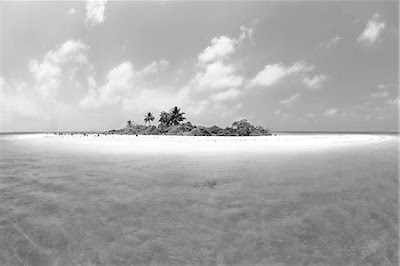