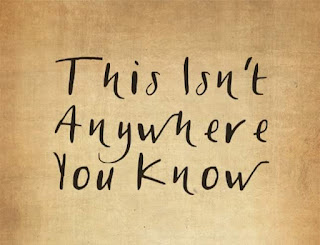 Charles stared into the darkness, at the dim outline of the tall trees and low bushes. A figure detached itself from the darker mass of the foliage. Then another. And another. More of them, stepping forward into the clearing.

There were men and women. They were dressed in formal wear: dark suits and ball gowns. Some of them had flashlights, which they switched on. Most of them were carrying hunting rifles. Their faces were covered with masks depicting the faces of well-known actors and actresses, politicians, famous musicians, and some that he didn’t recognise but assumed were celebrities of some sort.

Charles held up his hands in a placatory gesture and started to back away. “I’m sorry…I’m lost. I don’t want any trouble.”

One of the figures snorted like a pig, someone else giggled, and several others grunted in a guttural, wordless manner.

They were all moving forward, coming towards him.

(an extract from "After the Reading")

THIS ISN'T ANYWHERE YOU KNOW