Day job stuff: I'm back in the office three days a week.

I changed jobs during the first lock-down, so I've basically been working from home for over two years. It's tough adjusting. Getting up early. Wearing big-boy clothes. Interacting with colleagues. Driving to and from the office. But at least it's only three days a week; for the other two days, I get to sit at the computer in my shorts and flip flops, scratching my balls when I'm on a Teams call.

I've tidied up this website. Removed some stuff to make it more like a blog. I might go further and really freshen it up, but I probably won't because I'm lazy when it comes to technology.

Oh, I've started working on short stories again, and - more importantly - submitting them to fiction markets. Hopefully I'll get into some kind of routine again with the writing and start to feel like a proper writer again. Despite my various (and boring) creative droughts over the past few years, I do miss it when I'm unable to write regularly. It feels like that creative part of me - whatever organ it is that makes me put pen to paper, or fingers to keys - has shrivelled up and is just hanging there, a limp dick awaiting some kind of stimuli.

Maybe that's it...perhaps the creative drive is like the libido, and sometimes we need to give it a little blue pill to get it going.

Where am I even going with this? I have no idea. Just random thoughts I felt I'd share with the void as I try to get back into the habit of updating this blog on at least a semi-regular basis.

Pay me no heed. I'm just a typing fool. 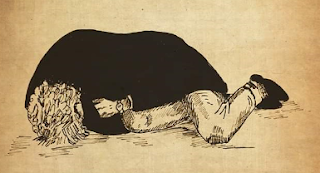