This is the first of what I hope will be a weekly update, just to get me blogging again.

As usual, I'm up and down with the writing. The sense of urgency that used to grip me is simply no longer there, and I've come to terms with that. So instead of writing obsessively, as if my life depended upon it, I've begun to write only if and when the mood takes me. Writing isn't my job; I no longer want to treat it like one. Instead, I'm using it as an outlet for my anxieties - which it always was, anyway.

This week I made some notes and got down a few hundred words on a new project, initially titled Smackmouth. It's a proposed novella about a young man returning to his childhood home to confront his personal demons. I know this is a common (and even cliched) theme in horror - it's also been a common theme in my own work ever since I first started writing seriously - but I really don't give a fuck. I'm just going to write it and see what kind of darkness is dredged up from my depths.

This project - if I complete it -  will feature some elements of northern folk horror, a little home-made magic, and some body horror. I feel positive about it but I'm also aware that over the past few months I've started several projects only to see them wither on the vine. We'll see. We'll see.

I've been unwell this week so haven't been to karate classes so my evenings have been spent watching films and TV shows.

Earlier this week I binge-watched The Sandman on Netflix. I've not read the comics so I came to this cold. I thought it was rather hit and miss but overall I enjoyed it - with some reservations. It was a bit "Dr Who-ish" for my tastes, and parts of it were downright cringey (as my teenage son would say). I also felt that it was trying too hard to not offend anyone and kept falling over itself to appeal to all-comers, so, to me, it felt far too safe...or perhaps safe isn't the right word: virtuous, maybe, or reverent? I imagine the comics are much more grungy and irreverent.

Midweek I re-watched an old favourite, John Cassavetes' Gloria. Gene Rowlands is glorious in this, and the film is a love letter to New York in the early 80s. Wonderful.

I'm slowly working my way through the brilliant Arrow bluray box set, ShawScope Volume 1. It's a sheer joy. Last night I watched The Mighty Peking Man, a film I'd wanted to see since I was a kid. It was a delight. An unparalleled work of mediocrity. One of the best worst films I've ever seen, up there with Food of the Gods, The Giant Spider Invasion, and Empire of the Ants.

ShawScope Volume 2 has just been announced. I put in my pre-order two days ago. 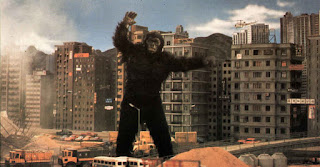 I'm still working my way through Paul Tremblay's The Pallbearer's Club. I'm enjoying it immensely and looking forward to seeing where the story takes me.

For some reason. my mind is currently drawn to cold things. Endless stretches of barren tundra, looming white mountains of ice, the stirring of something desolate, tired giants moving slowly through the black depths beneath the ice cap. I have an urge to re-read At the Mountains of Madness. Icebergs gather in the ocean of my dreams. Part of me feels as if there's a story idea building. For many years now, I've wanted to write a horror story set in the icy Arctic wastes. Maybe it's coming.