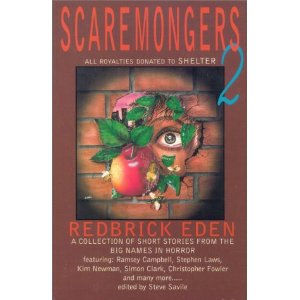 The Song My Sister Sang, by Stephen Laws, first appeared in a terrific anthology called Redbrick Eden. This was back in 1998, long before I started writing seriously, and the book contained stories by a lot of writers I admired (and still do). But the one that blew me away - the one that made me think "fucking hell, this is what good horror fiction does best", was by fellow northeasterner Stephen Laws.

The story is told in flashback by a narrator called Dean. It's about the summer when an oil tanker ran aground on the northeast coast, smothering the beaches with crude oil that killed off a lot of local wildlife. Dean was one of the volunteers drafted in to rescue whatever animals they could. He is also a man still grieving (and still blaming himself for) the childhood death of his sister in the local abandoned swimming pool that sits empty and forboding on the same beach where he is sent to work.

Dean is forced to enter the swimming pool when he follows an oil-slicked gull that is sucked into the sluices. Inside, he finds the pool filled to the brim with thick, black oil, and of course the event that haunts him returns from the past to pollute the present.

The story is a masterclass in deeply emotional horror fiction. The sense of place is stunning, the prose heartfelt, meaningful and evocative, and the plot is beautifully structured. There's a descriptive passage where Dean sees what at first he thinks is a swan emerging from the oil in the swimming pool - this, of course, turns out to be something else entirely, but the image has stayed with me for 13 years.
The ending will break your heart. The last line is a killer. Quite simply, this is one of the best horror stories I've ever read. It went on to be reprinted in the tenth anniversary edition of The Mammoth Book of Best New Horror and won the British Fantasy Award. Well deserved. It's a belter of a tale - one of those special stories that made me realise what I wanted to do with my own fiction.

My favourite short horror story is 'Petey', from Dark Gods, a classic Lovecraftian anthology by TED Klein. Structurally, it beats everything. The story moves so inevitably, it doesn't even need a climax. Sadly, it's out of print. - Mac Campbell
Www.iwritehorror.blogspot.com

It is a cracking story, and all the more "enjoyable" for me because it's set in a location I know very well. I can see why Stephen Laws was inspired to set a story there. I had the pleasure of meeting Stephen on a number of occasions when he was doing book signings and he was a great bloke. He seems to have disappeared from the scene, which is a shame because he wrote some exellent books (most of which were set in the North East)- high concept stuff written in beautifully crisp prose.