"He was sitting by the hole in the ground he’d just filled with soil, wondering how long it would take for the remains to begin to rot. Down there, beneath the packed earth, lay a small boy he’d taken from a street in three days ago. A small, underfed boy with not much to say for himself; he was maybe three or four years old." 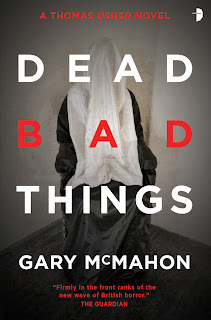 So today I received my author copies of Dead Bad Things - a  big box of lovely books from those wonderful people at Angry Robot. And it really is lovely, the physical book: an absolute joy to behold.

This is the second novel in a series featuring my protagonist Thomas Usher (I won't use the word hero, because he's far from that). It's a direct sequel to Pretty Little Dead Things, and the two books together form what I now think of as Usher's origin story. Further books will focus on the relationships outlined in these first two stories, and we'll get to know Usher and the people that inhabit his world a lot better.

The Usher novels slot neatly, I suppose, into the supernatural detective sub-genre. Usher can commune with ghosts, after a fashion...but his ability has its limitations. He can see the ghosts, but he cannot understand them or hear what it is they say. So he fumbles around in a literal darkness, trying to absolve his own sins (either real or imagined) by trying to help. Often he simply makes things worse.

I'm very excited about this book. I think it's a huge step forward from the first one in terms of plotting and characterisation, and I'm praying to whatever dark entities might be listening that it's enough of a success to justify more books in the series. I already have a third one planned. It's called The Night I Died.

Looking forward to it. Looks like it'll be available September 27 here in Canada. Count me in.

Got my Kindle version last week and really enjoying :)

Picked this up when I passed through London at the end of August and started reading it on Monday. Finished it today. Very dark, but a great read.