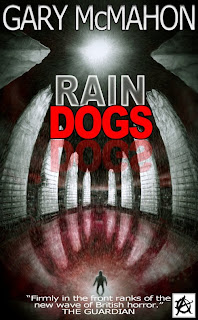 Anarchy Books is proud to present


This is the sixth release by Anarchy Books, alongside authors such as James Lovegrove, Andy Remic, Jeffrey Thomas and Vincent Holland-Keen.

The book is available in PDF, MOBI and EPUB formats for the low low price of £2.49 www.anarchy-books.com from 15th October 2011.


Guy Renford is fresh out of prison. His life in ruins, he is estranged from his wife and daughter. So he returns to the Yorkshire town of Stonegrave to try and recover what he once held dear. But a presence is watching from behind the endless rainstorm, something that wants revenge... and has not come alone.

Rosie sees ghosts. She has since childhood These sorrowful visions of drowned schoolgirls are linked to a past she fled to America to escape. But you can never run from destiny, and something is calling Rosie back to rainy Stonegrave, the home of her worst nightmares...

Slowly, the lives of these two people are drawn together in a town cut off by floods, and at the height of the storm they will be forced to battle a relentless foe that uses the deluge as cover, stalking them from within a merciless onslaught of rain...

THE DARK by JAMES HERBERT

THE MIST by STEPHEN KING

RAIN DOGS is an EBOOK novel by GARY MACMAHON, whose fiction has appeared in magazines and anthologies in the U.K. and U.S and has been reprinted in both THE MAMMOTH BOOK OF BEST NEW HORROR and THE YEAR’S BEST FANTASY & HORROR. He is the British-Fantasy-Award-nominated author of Rough Cut, All Your Gods Are Dead, Dirty Prayers, How to Make Monsters, Rain Dogs, Different Skins, Pieces of Midnight, The Harm, Hungry Hearts, and has edited an anthology of original novelettes titled We Fade to Grey. Forthcoming are several reprints in “Best of” anthologies, a story in the mass market anthology THE END OF THE LINE, the novels Pretty Little Dead Things and Dead Bad Things from Angry Robot/Osprey and The Concrete Grove trilogy from Solaris. Gary's website can be found at: www.garymcmahon.com

RAIN DOGS can be purchased from www.anarchy-books.com for £2.49 in PDF, EBOOK and MOBI formats. Artwork by Vincent Holland-Keen.

"Here comes the rain again..."
"Rain Dogs was the first novel I ever had published. This new, slightly revised version, sees the story presented in my "author's favoured version", with some minor edits and the original final chapter reinstated."
- Gary McMahon

Is there anywhere I can get this as an actual book???

I still have a few of the original hardback editions. If you'd like to buy one, you could always drop me an emil (address is on the "about the author" page).