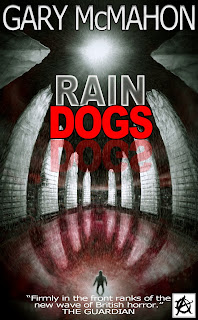 A few years ago I wrote my first novel, Rain Dogs. I'd never written one before, or even attempted one. Unlike most writers, I have no trunk novels; prior to writing Rain Dogs I'd only ever worked on short stories and novellas. At the time, it was a scary proposition.

Luckily, Guy Adams, who was then with an up-and-coming small press publishing outfit called Humdrumming, liked the cut of my jib, so after seeing the first couple of chapters he commissioned me to write the rest of the novel. It took me two years to complete. Back then, I was learning as I wrote. This was new territory; I was setting out into a darkness that I'd never experienced before.

Rain Dogs was finally published in 2008, in a beautiful dual-cover limited hardback edition. The book earned a handful of glowing reviews (including one from none other than Ellen Datlow) and was nominated for an award. Then, a few months after the book was released, Humdrumming sadly went into liquidation. I bought back the unsold copies (there were loads) and sold a lot of them privately, which meant I still got paid. I still have a box of them at home, tucked safely away towards my retirement plan. Ahem.

In effect, despite being well received, my "promising debut novel" wasn't given a chance in the marketplace.

I'm delighted, therefore, to annouce that a slightly re-edited version (including the reinstatement of the short final chapter, which was excised from the original edition) is being released on Saturday 15th October 2011 as an ebook through Andy Remic's wonderful Anarchy Books.


Check out the link here: Anarchy Books
Who said there was no sych thing as a second chance?﻿