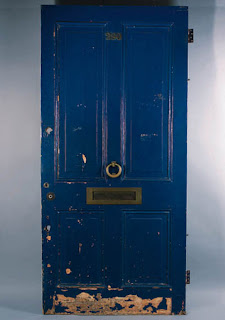 It was a blue door. Just a blue wooden door. Somebody had dumped it out in the street, next to an old skip. It was leaning against a low garden wall, not quite in an upright position. I walked on over there, across the street, and stood before the door, staring at it. The paintwork was chipped; the handle and letterbox were rusted. Along the bottom edge of the door, it looked like someone had spent a lot of time kicking the crap out of the baseboard.

A blue door. Nothing unusual about that.

I went to work and forgot about the door.

But it was still there when I got back, later than usual after working a couple of hours overtime. I stood eating hot chips out of day-old newspaper and looked at the door again. I couldn't understand why I was so drawn to it. My fascination was confusing.

I finished my chips, balled up the wrapper, and pitched it into the skip. Good shot. Then, wiping my mouth with the back of my hand, I stepped forward and kicked the door. Just once. The sound was answered by another, similar sound: a heavy rapping noise on the other side of the door.

I looked around. There was nobody about; the street was empty. The nearest streetlight flickered. I could hear traffic a few streets away. A house light went on suddenly, shocking me. Somebody opened their front door and started shouting for a cat or a dog or a stop-out kid - they yelled the name "Jude" over and over again.

I kicked the door a second time. Then I walked away.

When I got home I had a glass of whisky, watched a crappy American sitcom, and then went to bed. It took me ages to get to sleep. My mind was racing. I could still taste the grease from those chips on my teeth. For some reason I couldn't stop doing sums in my head - addition, subtraction, even simple fractions. Finally, thankfully, I fell into a light doze.

When I opened my eyes there was something different about my room. I peered into the darkness, trying to work it out. Everything looked the same, but something felt different. I reached out and turned on the lamp. I'm amazed I didn't spot it sooner, but it took me five or ten minutes to register what my mind had already grasped. It wasn't a big thing, but it was enough to make me realise that the world isn't as stable as we like to think.

When I'd gone to sleep my bedroom door had been white, just like the rest of the doors in my house. Now it was blue.

Wow, what a scary little story! It's good enough to send off for submission to any number of horror sites for a few bucks where THAT particular site's handful of fans can read it- but you chose to share it here with all of us. Thanks. Good luck in 2012 with all of your projects!

Thanks, Frank. I'm glad you enjoyed it.

Nice little tale. Does that door come from the same place as the Table and Chair in those particular stories?