I had a few high points last year along with several low points, but the best thing that happened regarding my writing was the publication of my novels Dead Bad Things and The Concrete Grove. The former seems to have slipped under a few people's radars (unless I missed the raft of reviews it generated), but the latter seemed to catch a lot of attention.

In 2012 I have several projects to work on. Regarding novels, I have a May deadline for Beyond Here Lies Nothing (the third Concrete Grove Novel) and no doubt there'll be proofs and copy edits to handle for Silent Voices (the second Concrete Grove novel) prior to its publication in the spring/summer. I'm also working on a novel for my agent to sell - The Quiet Room, which is an expansion of my highly acclaimed story What They Hear in the Dark which was published last year as a limited edition chapbook by Spectral Press.

I  also have a major new short story collection coming out later this year titled Tales of the Weak & the Wounded (more news on this one soon) and have been working hard over Christmas to finish a crime/occult novella for the same U.S. publisher.

Other odds and sods include potentially a short film of one of my stories and several short fiction appearances.

All in all, it looks like I'll be busier than ever this year...

To finish, here's a photo of my favourite gifts from Santa this year. 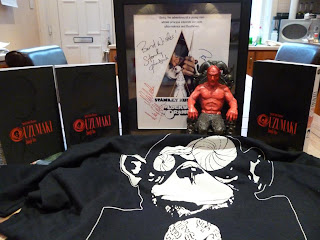 Aha! You spotted the Session 9 reference...well done, that man.