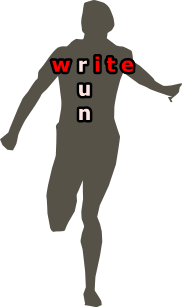 In my early twenties I got the running bug. I got it so bad that I suppose I became addicted to the act of running - that feeling of your body skimming cross the earth, the wonderful, almost orgasmic sensation one gets at the end of a good, hard run. My weight dropped dramatically; at one point I was nine and a half stone (133 pounds). People worried about me because I was too skinny. But I was the fittest person I knew.

I kept running for several years, and then somehow I let it slide. Not completely. I kept going back to it, but only half heartedly. It was never quite the same as in those golden years in my mid twenties, and the bug never bit me in that way again.

Right now, just a couple of months before I turn forty-three, I find myself four weeks into another running bug. I'm running four times a week - three times in my lunch break at work and on a Saturday morning. I've been suffering from a lot of stress these last few years, and running seems to be filling a void I never knew I had. Running is like writing: it takes commitment, dedication, will power. You have to keep grinding out the miles, no matter what. Just like writing a novel, when you have to keep on grinding out the words. Like writing, it's also something you have to do alone. There's no safety net; nobody's there to watch your back. You either run or you don't. You either write or you don't. In the final analysis, it really is as that simple.

One of the few regrets I have in life is that I never ran a marathon when I was fit enough to do so. I used to train with marathon runners, I took part in a  lot of road races, and once I even ran a twenty-mile fell race across the cheviot hills. The latter is the toughest thing I've ever put myself through and I'm more proud of that than any other physical challenge I've done. But I never did run a marathon. Maybe this time I will, before it's too late to matter.

It's good to have goals. In running, in writing, in life. But you need to run fast and hard to achieve them. And sometimes actually reaching those goals isn't what's important after all. Sometimes simply having them to spur you on is what really matters.

Massive respect to you with your running. It's something I could never do (not for long anyway). Was always more of a weights person and short fast sprinting. I'm also getting back into fitness after a few years off and on, and starting to enjoy it more than ever (even though I'm 36). good work there, you should absolutely do that marathon. Go for it.