AFTER HOURS (1985)
Directed by Martin Scorsese 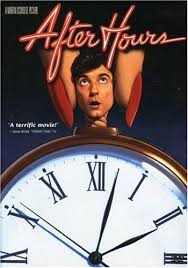 After Hours is an odd film. It plays like an existeltialist Hitchcock thriller. There's no plot, just a character going through a series of strange, inexplicable torments over the course of a night on the streets of New York City.

Griffin Dunne (an actor I've never really warmed to) is superb in the lead role, but it's the character actors who shine brightest; a parade of human oddities who push our panicked hero ever further into a special kind of darkness. Rosanna Arquette as the fucked-up object of the protagonist's lust, Terri Garr as a weird 1960s-styled neurotic, Linda Fiorentino as a mad artist who creates bagel and cream cheese paper weights, Catherine O'Hara as a vigilane ice cream vendor, and - my favourite - John Heard as a laconic barman.

Scorsese is no stranger to black comedy (I'd argue that most of his films contains elements of it), but here it's the driving force of the film. I've always called After Hours a horror film, and it certainly plays on the horror of paranoia. For me, it's one of the director's finest pieces of work. Everything he does best, he does it best here.