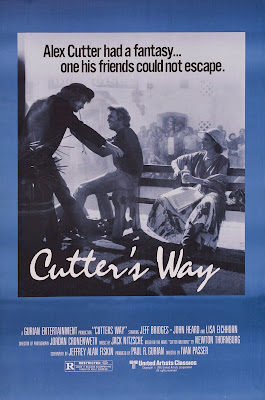 Based on an equally brilliant novel by Newton Thornburg, Cutter's Way is ostensibly a mystery about three disparate people coming together to solve the murder of a young woman. Along the way, the film takes in the themes of dead ideals, the effects of the Vietnam war, friendship, moral responsibility, and modern ennui.

Jeff Bridges plays a down-at-heel, burnt-out gigilo, Richard Bone, and John Heard is his grizzled, disabled veteran buddy Alex Cutter. When Bone thinks he sees a woman's corpse being dumped into a trashcan one rainy night, Cutter takes it upon himself to solve the crime - focusing all of his rage against the world into that single mission. Deciding that someone has to pay for the crime (the one aganist the dead girl and the perceived ones against himself), he starts to hunt down local oil baron JJ Cord.

Lisa Eichhorn is unforgettable as Cutter's alcoholic, washed-up wife, and they're given great support by Anne Dusenberry as the dead girl's sister, who's moist-eyed presence encourages Cutter in his single-minded quest for vengeance as everyone else starts to think that his latest conspiracy theory is out of control.

Cutter's Way might have a familiar set-up, but it doesn't follow the rules. It wears the veneer of a crime film, but it bends and twists the genre into a different shape. One man is physically shattered, the other is broken inside. The America of the time has damaged them beyond repair, and even this last desperate lunge towards retribution can't save them. Because they're beyond saving. Everyone is. There's nothing at the end of the investigation but more questions, more mysteries, ones about which nobody cares enough to answer. One of the film's later images, of a crippled Alex Cutter riding a white horse through a garden party like some fairy tale hero, is as sad and profound and pointless as anything I've seen put on a film.

Cutter's Way is a masterpiece. But it is a neglected one. Like its characters, the film has been sidelined, pushed towards the margins, where hardly anyone notices it's existence.