Once Upon a Time in America
Directed by Sergio Leone (1984) 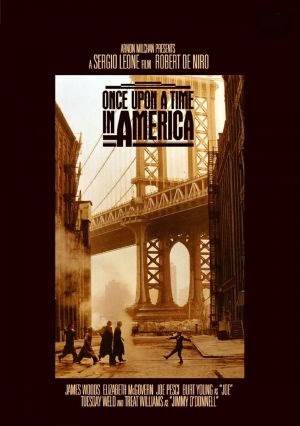 Once Upon a Time in America was the great Sergio Leone's final film, and for me, it was his best. It's also the greatest gangster film ever made.

The structure of the film - in it's full version, not the butchered travesty originally released in the US - consists of a series of flashbacks about a group of lifelong friends who start out as smalltime crooks in 1920s New York to become big-time gangsters, their lives eventually shattered by greed, betrayal, and violence.

The scale of the film is operatic. It's a grand epic poem, a slice of cinema that is as beautiful as it is brutal. It's tough to watch at times, and doesn't try to be moral. One rape scene in particular is very painful.

Robert De Niro invests the character of Noodles, who remains the main focus of the film throughout, with a deep sense of melancholy. At times Noodles is an unsympathetic character, but we are forced to stay with him as the story unfolds. James Woods, Treat Williams, Tuesday Weld, and Elizabeth McGovern are all outstanding in support. But the real star of the film is the cinematography, especially during those almost unearthly childhood sequences. This is a fairytale vision of New York, but it's a dark one.The scenes with the kids are enthralling - the best parts of the film. There's a heavy nostalgia, but also the suggestion that 1920s New York was a bit like the wild west. Corrupt cops, rival gangs, men with guns, run the city.

The film contains what is possibly my favourite scene in cinema. Cockeye, a young tearaway, buys a cream cake so that he can use it to pay a young neighbourhood prostitute for sex. As he sits on the stairs outside her apartment, waiting for her to come out and see him, he starts to scoop tiny bits of cream onto his finger and eat them. Soon the scoops become bigger; then, unable to help himself, he consumes the entire cake. When the girl comes out onto the landing, he stands there with only the empty wrapper. It's a wonderful scene, filled with an aching nostalgia, innocence, corruption, harshness, and beauty. For me, that single scene sums up the entire movie.

I love this film so much I had the soundtrack played at my wedding. Cockeye's Theme, by Ennio Morricone, is one of the most ravishing pieces of music I've ever heard.