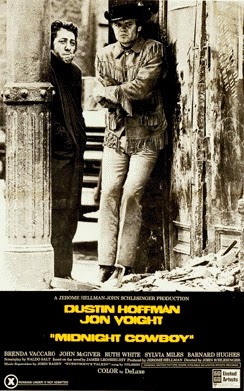 I first saw Midnight Cowboy on television during my early teens. I had no idea what to make of it, but I was absolutely gripped from beginning to end. I was also scared. There's a creepy quality to the film that I rarely see mentioned. It's almost like some sleazy ghost story, but without an actual ghost.

The young John Voight is brilliant as Joe Buck, a Texas dishwasher who quits his job and goes to New York City to find his fortune. Haunted by an event from his past, he believes that his life will be better there. He dreams that he will be a roaring success as a gigolo - the middle-aged Manhattan housewives will be queuing up to be his customers.

The reality is somewhat different.

Broke, tired, and kicked out of his hotel, Buck is befriended by a diminutive conman called Ratso Rizzo (Dustin Hoffman is the best role of his career), but Rizzo simply wants to rip off the niave cowboy for whatever cash he might have left in his pockets. The two form an unlikely partnership, careering around downtown Manhattan, living in a sordid squat, trying to grift for a living, gatecrashing a Warholesque party...

What follows next is sad, melancholic, and ultimately depressing. But somehow the film never loses the viewer. The central performances are astonishing. 1970s New York is a character rather than a backdrop, and the place has rarely seemed so intimidating yet so darkly beautiful. This is one of the films that shaped my imaginary image of New York. The city is one of my favourite places in the world, but I wish I'd seen it when it was like this. I wish I'd walked those same midnight streets as Ratso Rizzo and Joe Buck, stopping traffic and watching the freaks parade on by.

Waldo Salt's literate adaptation of James Leo Herlihy's wonderful novel never puts a foot wrong. The direction is eager and energetic, the famous soundtrack is fitting. Initially repulsed, we find ourselves falling in love with these grotty, downbeat, doomed characters, and if the ending doesn't move you don't ever expect to be a friend of mine.