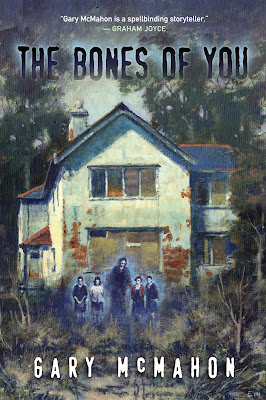 Here's a brief extract from the beginning of The Bones of You:

Last night I had the dream again.

It comes and goes, along with other, darker dreams, but I’m always aware of it running in the background as I sleep. Sometimes I’m unable to distinguish the difference between what is dream and what is memory – the lines blur, the events in my head take on the precision of acts that have already been committed. Even when I’m awake, I feel like I have one foot in another world.

But I know for certain this specific dream isn’t real, because I see it through the eyes of someone else.

I realize that he can no longer harm me or my family, but I often imagine that he’s still out there somewhere, watching me from the shadows, waiting for the right time to return.

Perhaps when I have this one dream, I am actually experiencing his memories, or the strange combination of fantasy and reality that fueled his terrible deeds. Or perhaps this is in fact where he is now, trapped in some netherworld where it’s always Halloween and he’s forever carving a pumpkin in the image of someone he loved and wanted so desperately to bring back into the world.

I don’t know. I’m way past caring about such details.

I just wish this particular dream would come to an end:


The pumpkin, faceless and eyeless yet nonetheless intimidating, glares up at him as he sits down opposite it with the knife.
He cleared a space on the kitchen table earlier in the day, putting away the old photographs, train tickets, and receipts from restaurants they had dined at over the years. She had kept these items in a large cigar box under their bed, and he had always mocked her for the unlikely sentimentality of the act. But now that she is dead, he silently thanks her for having such forethought. At least he now has physical mementos of their time together.
He fingers the creased, leathery surface of the big pumpkin, imagining how it might look when he is done.
Every Halloween she insisted upon the ritual, something begun in her family when she was a little girl. A carved pumpkin, the task undertaken by the man of the house; the seeds and pithy insides scooped out into a bowl and used for soup the next day. She had always loved Halloween, but not in a pathetic Goth-girl kind of way. She always said it was the only time of the year when she felt part of something, and rather than ghosts and goblins, she felt the presence of human wrongdoing near at hand.
He places the knife on the table and feels empty tears welling behind his eyes.
Rain spits at the windows; thunder rumbles overhead. The weather has taken a turn for the worse, as if gearing up for a night of spooks. Outside, someone screams. Laughter. The sound of light footsteps running past his garden gate but not stopping, never stopping here…
The festivities have already started. If he is not careful, he will miss out on all the fun.

The first cut is always the deepest, shearing off the top of the pumpkin to reveal the substantial material at its core. He slices around the inner perimeter, levering loose the bulk of the meat. With great care and dedication, he manages to transfer it to the glass bowl. Juices spill onto the tablecloth, and he is careful not to think about the image of fresh blood dripping onto creased school uniforms.

Fifteen minutes later he has the hollowed-out pumpkin before him, waiting for a face. He recalls her features perfectly, his memory having never failed to retain the finer details of her scrunched-up nose, the freckles across her forehead, the way her mouth tilted to one side when she smiled. Such a pretty face, one that had fooled everyone; and hiding behind it there were such unconventional desires.

Hesitantly, he begins to cut out the face.
The gorgeous limited hardback is available for preorder now by clicking the link, and it will be published on Halloween:
Preorder The Bones of You