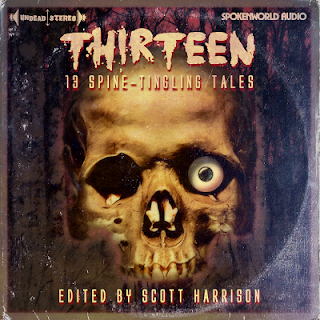 Thirteen is an audio horror anthology edited by Scott Harrison. It contains a superb recording of my story Down. I listened to this last night and was completely blown away by the quality - it was wonderful to hear my story read by a proper actor and with proper sound production. Really impressive stuff, and there are a lot of great writers involved in the project. Apparently, if this one does well, there's talk of a potential series of these audio books...

So, if you're interested, the audio will be available to download as a 320kpbs MP3 from Saturday 24th August, from Spokenworld Audio. The price will be £9.99, and I believe there's a CD to follow.

Here's the full table of contents:

Hidden Track(Part I) by Scott Harrison [read by Barnaby Edwards]

One - Dead Space by George Mann [read by Gregg Wise]

Five - Down by Gary McMahon [read by Stephen Rashbrook]

Seven – Half Life by Dan Abnett [read by John Banks]

Hidden Track(Part II) by Scott Harrison [read by Barnaby Edwards]
Side B:

Thirteen – I Wish by Johnny Mains [read by Steven Cree]