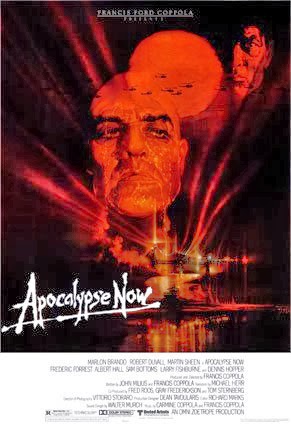 A lot has been written about the making of this film, so I won't go near that particular topic. I'll stick to the film itself. Ostensibly an adaptation of Joseph Conrad's Heart of Darkness set during the Vietnam War, this is an incredible journey into the darkness of our times. It isn't just the best film ever made about that war, it's also one of the greatest films ever made about the madness inherent in the human condition.
﻿
Martin Sheen is wonderful, Brando is beautifully insane, and the locations drip blood, sweat and madness. When I first saw this film it scared the shit out of me. It was like catching a glimpse of real warfare, but the battle was being fought for the soul of mankind. We are dragged along by Captain Willard on his increasingly troubling quest for the enignmatic Colonel Kurtz, and as he journeys deeper into the jungle, and into the corridors of his self, we are forced to take a good look at our own dark places.

This film gets inside you. It's impossible to watch passively; you're forced to become involved at some level. The twitchy, edgy horrors push their way under your skin. It's an exhausting experience. It's also funny (in a crazed way), violent, poetic, terrifying, and strangely celebratory.